The adage “the whole is greater than the sum of the parts” is fundamental to an organization responding in Haiti, no matter how narrow the mission. There are 21 NetHope member NGOs responding in Haiti, with over 3,500 workers on the ground. Each is doing what it does best, whether search-and-rescue, providing clean water, or distributing mosquito nets. NetHope adds shared communications to coordinate their work. Corporate partners, in-turn, add expertise, equipment and rapid funds to move it forward.

Here are some highlights from Friday’s status reports of people on-the ground:

Notice the connections among the responders and corporate partners. Couple this with the rapid contributions from Microsoft and Blackbaud and you can see the power of people connections at work in technology connections. One of our funders put it succinctly: “we know you, we trust you; we partner with people who know how to respond.” That’s an added value of relationships, based on trust and a history of working together.

One of the lessons we learned from the 2004 Tsunami response in Southeast Asia is the need to make decisions quickly, and in ways that are different from the typical ways of decision-making. That’s true for those doing relief work as well as those supporting this work. Following the Tsunami response, an NGO marketing director recalled, “We didn’t have time to have all the meetings, all the reviews, and all the approvals. We had to make on-the-spot-decisions. The interesting thing”, she continued, “is that nothing fell apart.” Extraordinary times require extraordinary approaches.

One of the founding principles of NetHope is “benefiting all benefits one.” Doing things together, like setting up VSAT communications in Haiti, helps each member do its work. That means that some members often do more, but that’s part of the commitment to doing things together to benefit all. The work in Haiti demands no less.

I stopped by my alma mater, Save the Children, yesterday. A banner was hanging from the front of the building announcing relief efforts and a web address; on the door was a sign saying walk-in donations were welcome[1].

A week after a 7.3 earthquake struck , we are seeing a massive response from governments, nonprofits and others. All the major relief agencies, including the UN, have near-daily briefings and situation reports. The cry for information is as strong as the cry for help. The two are inseparably linked. Donors want to know how they can help, what’s being done, and where there is hope. Headquarter workers needs to know from those on the ground how many are hurt, missing, displaced and dead.

In the early stages of disaster response, there is a bit of chaos. First, is assuring that workers in-country and their families are safe and counted. Next are the rapid needs assessments for food, water, shelter and medical supplies. Sat-phones are most often the earliest form of communications, if they are charged and accessible. Resources are readily shared; we’ve worked together before.

This time I’m working with NetHope, an organization I helped found. NetHope is a collective made up of IT leaders from 28 international nonprofits who understand the need to collaborate to bring information and communications technologies out the last 100 kilometers to the most challenged areas in which we work. We’re focused on collaborating among our members to provide essential connections that enable information to flow, which in turn supports the critical mission of ensuring supplies and people go to where they’re needed most.

Many of the non-government organizations (NGOs) in are smaller than the UN with far fewer IT resources. To be effective in IT in troubled areas of the world, we’ve found again and again that we need to collaborate and share so that every NGO has access to core data and voice communications. Consistent, reliable communication is one of the cornerstones of relief efforts, ensuring that aid reaches the people who need it most.

Today one of our NetHope engineers is working with a member, CHF International, who occupies high ground ideal for a satellite link. Here’s a bit from his first report:

We arrived at CHF compound today just before dark. Kah located a clear line of site to AMC4 and IS14 [Satellites] on a “safe” part of the roof (both come back to ITC’s teleport.)

The panels of the dish have to be pulled up on rope lines from outside; too big to go up the stairs. CHF has that covered and will help us tomorrow. Power and cabling does not look to be a problem.

Information about what members offices need to be connected would be good to gather soon so we may have sites to survey when Inveneo gets here. The CHF office is on high ground which is promising for that part of what we are trying to do.

We should also add up the incremental power requirements for everything we plan to locate at CHF. 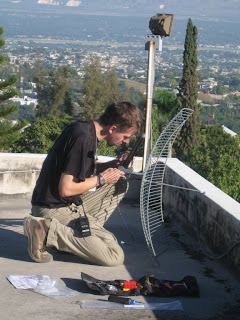 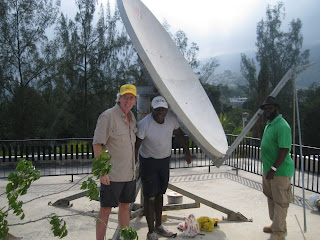 There comes a time when you realize that you have achieved your goals and it is time to move on to the next chapter in your story. I am at that juncture and need to turn the page. I therefore elected to take an early retirement from Save the Children.

Here are some of the remarks I made at my final staff meeting at Save that I'd like to share with the rest of you. These are words of encouragement and challenge, not only for IT at Save, but technology people at all nonprofit organizations.

However, these numbers don’t tell the whole story. As Charlie [our CEO] put it so well, we have been the team that has brought technology into the 21st century at Save.

Part of this has been about vision, and part has been about hard day-to-day change. Some have suggested that I’ve often been five steps ahead of everyone else. That’s short of chess masters who claim to see a dozen moves ahead, so there’s always room for improvement. Though it’s often been a lot of change to handle, I’ve always felt that if you stand still, you get hit by the train.

Imagine a bullfrog sitting on an old train rail. It is a strong frog. It is a fast frog. It is a wise and noble frog. One could even say it’s a prince of a frog!

In the far distance, from the south, is a faint whistle.

Ever so slowly the whistle grows louder. "Ah, the sun is warm," sighs the frog, "It is nothing."

Louder still gets the whistle. "There is time," says the frog, "the wind whistles too."

Then the whistle becomes a roar.

"I feel a rumble," the frog says out loud, "perhaps I should pay attention."

He turns too late and is flattened by a roaring bullet train, barreling to the north.

“The frog would jump in time, wouldn’t it?”

"OK," I say, "the frog jumps to neighboring rail, a familiar stretch of iron."

And he's hit by a different train, an old freight train, barreling to the south.

Right now, in our IT departments in nonprofit organizations, we are the frog. The whistle that grows steadily louder, the northbound train, is the call to move north, to be a more mission-moving force in our organizations. The freight train lumbering south, is the recession, hard times, and the retrenchment to familiar, lights-on operations.

Now imagine you are the frog. What do you do? In many ways, we have been a team that’s moved forward. And this is our call anew today.

So what am I doing for the next chapter? There’s a “burning platform” that needs attending. We need to move the IT agenda up the pyramid, as you’ve heard me say a hundred times or so. As most NetHope members have experienced the budget cuts of the past year, it’s hard to keep the lights on, let alone make the changes needed for leveraging technology for delivering our programs in the field. How to better do that is my next mission. You can expect to hear some great things coming out of NetHope and elsewhere as a result.

Lastly and most importantly is my sincere thank you to all who put in the long hours and dealt with the complex and thorny problems that technology often presents. We could not have achieved our goals without the team work. For that I will be forever grateful.