Foursquare CEO and entrepreneur, Dennis Crowley, told the students a few days ago that their great idea may not be at the right time yet.  Ask any comedian and they will tell you that timing is everything.  And I believe a comedian once said that all things come to he who waits... provided he works like crazy in the meantime.


One of the teams I judged today was back for the second year.  They had a new idea,they learned from their experience, and they were wiser. They made the final round this time.  We asked another team when they began their project--last September.  The teams that made it to New York had worked long and hard, even while "waiting" for a second chance. 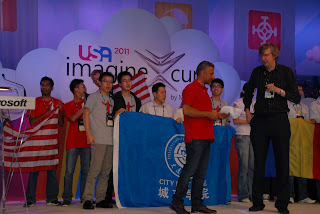 We narrowed the field in the software design category from 18 teams to 6 today--just 10% of the teams who made the finals in Imagine Cup this year.  For those who like doing the math, we started with 350,000 applicants.[1]


[1] I've written about this competition as an incredible funnel of innovation and ideas.  And I've seen first hand that there's also an opportunity for the teams to learn from each other.


"The postings on this site are my own and don't necessarily represent positions, strategies or opinions of any of the organizations with which I am associated."
Posted by Edward G. Happ at 5:19 AM