During a break between demos at Imagine Cup, I stepped outside for some fresh air. On the promenade, a crowd had gathered around a juggler. I stepped up to the circle and watched him toss an assortment of knives and one-liners. At one point he dropped a knife, and immediately shifted to some on-the-ground "juggling", which he did slowly, knives on the pavement, so we would not miss a turn. "I don't need your pity," he barked with a cheshire grin! 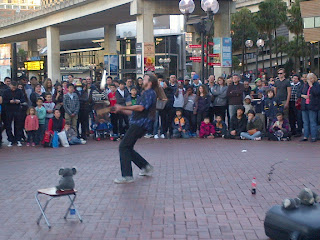 Of the nine teams I saw at the Imagine Cup, the demo's for more than half failed at some point. The angle of the Kinect box was off for one, a battery pack had drained for another, a laptop failed, an Internet connection was painfully slow, a slide did not build with its image, and so on.

There are a few lessons from our juggler that apply to the software demo. To start, practice, practice, practice. The juggler made sure we knew he had been at his craft for twenty years. He had obviously tossed these knives a few times before.

Plan on something failing. As Murphy's Law states "anything that can go wrong, will go wrong." A knife will fall. How will you handle that? (Pun intended :-)

Have a "b-plan". When your first plan fails, what will you do instead? Do you have an on-the-ground demo you can substitute?

Last but not least, use some humor! Nothing cuts the stress of the moment like some levity.

I received an update flag on my iPad today for the Yelp app I have installed. The explanation was priceless: "Fixed a bug causing the iPad app to crash for Italian users. No bosons were harmed during this collision." No less a software design judge, instead of being annoyed, I was entertained.

"The postings on this site are my own and don't necessarily represent positions, strategies or opinions of any of the organizations with which I am associated."
Posted by Edward G. Happ at 3:30 PM