I was at the DIHAD 2011 conference in Dubai this week. The theme of the conference was "New Technologies:  How these impact humanitarian and development operations."[1]  Here is an expanded version of talk I gave as part of a panel.  A copy of the slide deck is on my web site at eghapp.com
Two Kinds of Two Kinds of Social Media
I have three take-aways for this paper, which I’d like to state up-front, so you know my intentions from the outset.
1)      Technology capacity building for the vulnerable needs to be clear about audience and intention (and beware of unintended consequences)
2)      The most important participants on the team are the beneficiaries, and the most relevant technologies are the ones that beneficiaries adopt
3)      The prophets and the priests of technology can learn from each other (assuming both distance and proximity)
I propose these three points as my theses for which I invite your debate.
A 2x2 Lens
When I was in graduate school, I heard a lecture by a visiting professor on “Two Kinds of Two Kinds of Civil Religion.”  He proposed a matrix with dimensions of style (priestly or prophetic ) versus transcendence (national-self or deity)[2].   He went on to suggest that a colleague was in the self-transcendent, prophetic cell, and the debate was off and running.  The dialog between the prophetic and the priestly voices was not lost on me.
This was my first introduction to the 2-by-2 matrix lens for looking at complex issues, something our consulting colleagues remind us in each presentation; that no business school student can graduate without mastering.  So being a student of business and humanitarian organizations, I propose applying this approach to the currently lively area of social media and humanitarian work.
To make sense of the landscape I propose a simple paradigm of intention versus audience with examples from recent events.
It is useful to ask who are the audience, who are the speakers, and what are their intentions?

In our desire to embrace technology we often forget that a tool is an extension of purpose; and that the same tool can be used to harm as to cultivate.  Related to this is the reminder that the enthusiasm of individuals doesn’t always connect with the work of organizations, and the reverse is also true, especially when it involves a change in technology mindset.  The guardians or “priests” of technology are often at odds with the “prophets.”
Good Intentions and Individuals
Let’s look at these one at a time.  The on-line community that has formed around tools like Ushahidi (http://www.ushahidi.com/) has made it possible for the technology-skilled to help when a disaster occurs.  The availability of cheap, easy to access tools makes possible a new category of volunteering.  Whether in Haiti, where survivor information was aggregated and mapped, or Japan where responder and journalist information were the primary sources, it is the processing of data by volunteers that provides a new view of the post-disaster situations.  And this information is being produced and interpreted faster than ever before.  In Japan, by day 5, OpenStreetMap community had mapped nearly 3,000 data points[3].  These are good intentions by a crowd of individuals.
The Uncultured Project (http://uncultured.com/), founded and led by Shawn Ahmed, a graduate student at the University of Notre Dame, was inspired by a speech made by Dr. Jeffrey Sachs (author of “The End of Poverty”).   His project shows the power of one individual when connected to the social media. Shawn is one of the top five viewed video-bloggers on YouTube talking about global poverty, with over 2.2M views.[4]   He has appealed to his generation of YouTubers to help rebuild a school in Bangladesh whose roof was blown off by Cyclone Sidr[5].  Shawn tries to engage his audience on awareness of global poverty, and gives the poor a voice through social media.
Good Intentions and Organizations
Shifting the focus to organizations, the Red Cross and Red Crescent (RCRC) SMS project in Haiti is an interesting case.  RCRC partnered with Trilogy Partners who own Voila, one of the largest cell phone providers in Haiti, to develop an innovative application that allows sending targeted SMS messages to beneficiaries in Port au Prince.  The application uses a Google Maps mash-up to allow “drawing a circle” around an RCRC center and selected cell phone towers, and sending information relevant for that center and location.  Some of the statistics are impressive:

Even if we work out the answers to all our satisfaction, the success criteria will remain: what gets adopted in the field, by those on the front-lines in disaster relief, and by the first responders who they serve: the beneficiaries.  We can have the best intentions in the world, but if it does not have impact in the most vulnerable places in the world, it will go for naught.
I leave you with two stories.  This one is from a journalist in a refugee shelter in Northern Japan following the earthquake and tsunami that reminds us that we need to work together:
A barber “was giving free haircuts on Thursday with scissors and a razor borrowed from a friend in a nearby town. “We have to support each other,’ he said, ‘and this is what I know how to do.”[16]
The second is a photo I took in one of the poorest communities in Manila. A young girl wandered in from the street while I was taking photos in a day care center and wanted to be a part of the action. 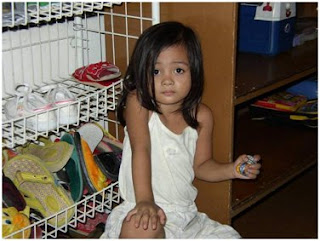 It was not until I returned to the US and enlarged the photo that I noticed that she was holding a dozen bottle-caps in her left hand.  These were her toys for the day.  This was a poignant lesson for me on three counts:
Now change the word “toys” to “technologies”.  Connections with people, where they are, with what they use, is the most important thing. We would do well to remember this when designing technology for disaster response and preparedness.
"The postings on this site are my own and don't necessarily represent positions, strategies or opinions of any of the organizations with which I am associated."