How to describe ? Everywhere there are signs of the sun, from the sand and limestone-colored buildings and hills, to the open air markets and people leaning out of windows in the evening looking for the cooling breeze. And the rich mix of the old and the new, the wealthy and the poor, and all that is in between.
I'm on the way to the Citadel, or home of the Mohammad Ali Mosque, as our guide reminds us, for the opening ceremonies of the Imagine Cup. The bus ride is a time to see the streets, marvel at the drivers and the traffic that would give even a cab driver a pause, and reflect on the day.

Today was full of preparation, before the opening ceremonies and competition begins in earnest. I attended briefings for judges, press reviews, and watched and rated advance video presentations from some of the teams. I studied nine, finishing just after 6:00 PM, in time for the second wave of busses to the Citadel.

All presentations are scored using a common form. There are 10 category ratings (like innovation), equal weighted, each on a 10-point scale. So for the mathematicians among us, that's a maximum of 100 points. There are definitions for each. It is hard to keep all ten in mind as I watched each clip. I took notes and wrote comments to go back to the teams. This feedback is an important part of judging and one I spend time on, thinking about how each team's application and presentation could be better. 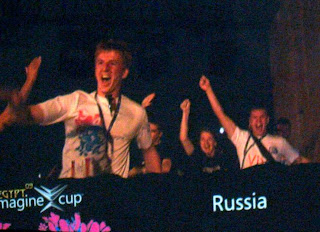 At the opening event, we are outdoors in a corner of the fortress, parts of which date back to the 9th century. As the sun sets, each team is introduced; they run down the aisle cheering, holding flags and brimming with energy as those who have no sense of limitations. Their larger than life exuberance is broadcast on the large screen behind the stage. There are introductions and speeches and memorable lines. One that Ray Ozzie said will stay with me, harkening back to the eccentric students who founded many of our technology companies: those "who believed they could change the world, or didn't know they couldn't change the world." As Joe Wilson reminds us, this is their event and we are honored to be their guests.