The Power of Metaphors

I was sitting in our monthly All Staff meeting listening to MB talk about a new ad program. Toward the end of her update she started telling a story of the bicycle. This is how it goes at Save the Children:

Charlie (our CEO) has a vision and he picks me to ride the bicycle toward the vision. While we are riding, we are actually building the bicycle. And we are looking for some cash to purchase needed spare parts to build the bike. So we have the mandate to act now, but we are often resourcing the mandate while we are doing it.

This story communicates a very pragmatic, "do something now and figure out the details later" approach, which indicates our bias for action as an organization. The story captured the essence of this way of doing things in our organization. Lining up the plan and the funding in advance is not the way we get things done. This is the power of a metaphor, it communicates a truth in a way that's more powerful and memorable than if we just stated how we do things.

American author Orson Scot Card writes that "Metaphors have a way of holding the most truth in the least space." I like this sense of compactness, and the sense this a small spark can engender a big idea. These two aspects are certainly a part of the bicycle story.

Lately I've been searching for pithy stories among our project management folklore, stories or pictures that indicated a dramatic turn in our understanding and became galvanizing force for the project. 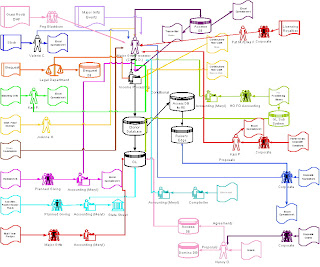 The "migraine chart" from our capital campaign project, above, is one of those examples. It showed all the types of revenue for which we had to account, and how many of these were individual data stores. We called it the "migraine" because it reminded us--on a single page--just how complex keeping track of revenue at an NGO was. But it also became the rallying point for the project: "This is why we are moving to a new campaign management system, to handle the migraine and make the headache of the all the disparate pieces go away (or more precisely, come together.)"

Capturing the "why are we doing this" in a single image is very powerful. Regardless of all the other details, one stand-out issue can become the poster child for why we are in the midst of major change.

Don't underestimate the power of a simple story. Children never do; they readily see the magic in stories. They get on the bicycles and learn to ride them. We would be wise to seek out the stories in our organizations and retell them again and again.
Posted by Edward G. Happ at 4:52 AM