The Wisdom of Simplicity

Here's a story I told as part of my chairman's address at the NetHope Summit in Geneva. It's a metaphor to remind those of us who are technology leaders about what we we doing and the value of pragmatic solutions.

The Case of the Tractor Trailer

There are a number of bridges in Connecticut, where I live, where the clearance is too low for full-sized trucks to pass beneath. This is especially true for the roads that cross under the commuter train tracks that run through the Fairfield Country towns along the coast. I found this out recently when I moved. The driver of the moving van pulled out his maps and asked me about alternate routes, pointing to the roads he needed to avoid. We figured it out.

A driver of a tractor trailer was not so lucky. He got wedged underneath a bridge and was unable to move. The police and highway department were quickly on the scene. They talked about dissembling the truck, using a very large tow truck to pull the truck out, cutting into the bridge girders, and cutting the top of the truck off. The debate was lively, and none of the solutions looked quick or easy. In the middle of all this a young boy wandered up to the group of highway workers who were huddled over some drawings of the plans being considered, and tugged on one of their sleeves. 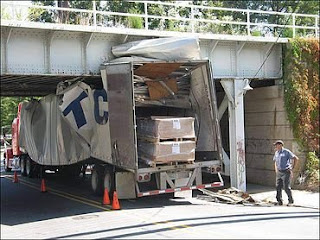 A simple solution. Practical. Brilliant. So the moral of the story? The truck is our programs that move our missions forward. Our goal as IT people is to get the trucks to their destinations. Our challenge: will we be more like the highway officials or the child?